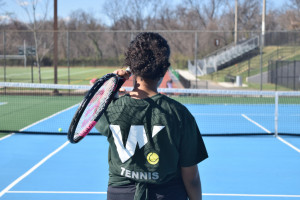 The Wakefield Warriors were victorious in today’s match vs. the Thomas Edison Eagles. It was a very close match played on a great tennis day with lots of sunshine and no rain or wind!

Singles: The Warriors took the lead in singles, 4-2.
#1: Grace Kalfatovic ran the court and placed the ball beautifully into open space on the court, forcing her opponent to work hard for every shot. (10-3)
#2: Catherine Chen made her presence known with strong and consistent strokes placed strategically on the court. Her angles and depth were spot on today. (10-1)
#3: Amanda Bloom played another marathon match proving that the match is never over until it’s over and that you cannot count her out. (10-7)
#4: Joann Chong played with great heart and never backed down despite her loss. (3-10) The spectators could not stop talking about how much fight she displayed as she continued to battle until the very end of her match.
#5: Diana Mercean consistently positioned herself in the best location on the court for each shot. When things stopped going her way, she quickly bounced back and kept her head in the game in order to win. (10-6)
#6: Melat Tarekegn continued to show her tough side as she created excellent shots and fought hard for every point despite her eventual loss. (4-10)

Doubles: The Warriors pulled off the match-winning victory at #2 doubles to secure the overall 5-4 match score.
#1: Grace/Amanda – Exhausted from her marathon singles match, Amanda teamed up with Grace to face the #1 Edison duo. The Warriors played out some outstanding points, many of which included Grace repeatedly running the width of the court. Despite their terrific effort, the Eagles came away with the win. (5-10)
#2: Catherine/Diana – Despite Diana’s tiring match, she hung tough with Catherine in an outstanding 10-2 victory. Diana and Catherine found the holes in the Eagles formation and attacked with precision.
#3: Joann/Melat – Joann and Melat, also tired from their long singles matches, headed to court 3 with their heads held high. They battled out several close points and placed several outstanding shots despite their eventual loss. (1-10)